Saint Paul is not my home town, but I've lived here for  11 years now- about as long as I've lived anywhere at this point in my life.  Almost exactly as long as I lived in the other, very nice city across the river, Minneapolis.  I love them both, the way I love both of my kids.  They're different, but both good in different ways.  One is more chatty and talkative, with a better art and music scene, always recreating itself and following the newest trend and trying to keep up with Portland and Austin and Seattle and Boston.

That would be Minneapolis, for those of you not familiar with Minnesota.

Saint Paul is the older, but quieter sibling, who loves books and the orchestra.  Home to lots of small private colleges (but Minneapolis of course has the big, noisy Big 10 stadium, and the campus that gets all the attention.)  St. Paul is home to Garrison Keillor and the Fitzgerald Theater and the guy who the Fitzgerald Theater is named after.  Saint Paul doesn't draw as much attention to itself, and when it strives, usually strives to keep up with Minneapolis, rather than some comparably hip city on one of the coasts.

But today, if I were to continue the kid analogy, Saint Paul brought home a report card full of straight A's, a State Fair blue ribbon and full scholarship to Macalester college.  At least in my heart it did.

Because today, my home city chose an absolutely phenomenal project to grant a million dollars to help implement.  A cooperative farm-supplied food warehousing, processing and selling facility, in a fantastic vacant building in one of the coolest, and least appreciated parts of this cool and under-appreciated town.

The "Urban Oasis" would be based in the Bruce Vento Nature Sanctuary, in a corner occupied by a large former railroad depot and storage building that I've ridden by and appreciated on some of my lunchtime walks and bike rides from my work in downtown Saint Paul.  It's just east of the downtown, and just below the bluffs that give the Daytons' Bluff neighborhood its name.

It's one of those neglected and beautiful places that you sometimes find.  A little bit scary, because of the graffiitti  and broken windows and possible strange people lingering in the undergrowth- but beautiful in the way that a glass tower could never be.  Grown over, with nature taking over where people haven't bothered to clean it out.  Fading, but not falling down.  A testament to the higher construction standards of over a century ago- the surrounding landscape beaten down by train and truck traffic, but growing back- a wild weedy version of the prairie that used to be there.

It's the kind of beautiful place that I was pretty sure was destined  to be torn down to build pole sheds to store dump trucks or road salt or some such thing.  Or build cheesy suburban townhouses. I've seen that happen to a lot of these neglected beautiful places ( mostly in Minneapolis, of course).    But then I heard  today- on the radio- that the Urban Oasis had been chosen as the million-dollar winning project, and that it would be implemented there.

This is good on so many levels.  First- because the shy kid has stepped out of the shadow of the bigger, louder, attention-getting sibling and did something that the other hasn't done, and hadn't even conceived of, maybe because  Portland and Austin and Seattle haven't conceived of it just yet either.

Second- for all the other good reasons that it's a fantastic idea to turn a big vacant brick building next to an urban nature preserve into a place for small farmers to sell their produce and process it into things that people in the largest urban center in the state can eat.  In an area that has sometimes been described as a food desert- though I might take issue with that.

I'm so proud and so happy- that over 50% of the people who voted, chose this project from the three finalists.  That there are that many other people in and around Saint Paul who value organic gardening, farming, cooking, food preservation, and preservation of a historic building, to choose it over housing for the arts, or programming for youth- both the sort of thing that usually soak in grant money in Minnesota.    Both good causes, but not essential in the way that I hope the Urban Oasis will be.

There is a great gap between the underpaid small farmers of Minnesota and Wisconsin, and the food wants and needs of the masses of Saint Paul and Minneapolis where good organic produce costs an arm and a leg.  It's wonderful to see a project that aims to address both issues and in a way that will (hopefully) benefit both.

So here's raising a cold, locally-brewed beer to the new Urban Oasis.  Congratulations on your million-dollar idea!  May it be well-implemented and beneficial to all!   And Viva Saint Paul Minnesota!

Since I posted last, I've had an article come out in the Minnesota chapter of the American Society of Landscape Architects magazine about Merriam Station Community Garden and its creation.  This issue-  Summer 2013- centered around sustainability and urban living.  Take a look if you like.  Click on the image of the cover below and it should take you right to the magazine.  My article is near the front.  It's yet another reason I love Saint Paul.  And the ASLA. Veritable lovefest today. 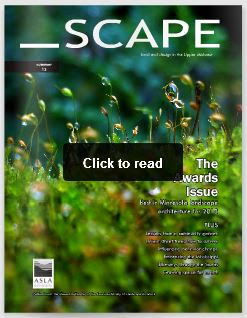