You learn a lot of interesting things when you do landscape design for a living.

I get to call myself a landscape architect now after running the gauntlet of higher ed, board exams and internships.  As a result I get to design parking lots and ballfields and sidewalks and other projects which, while not all that interesting, pay the bills and keep me out of trouble.

Before that happened, I did residential landscape design, that is, designing yards and patios for homeowners.   During that time I was able to meet a lot of people and learned a lot about what people think about their yards and what they want to encourage and attract to their outdoor space.  I talked with people who wanted to create butterfly habitat, people who wanted to restore a piece of native prairie in their quarter-of-an-acre backyards, and people who were interested in having their yards certified as official wildlife habitat.

And all of those were really noble goals.  I don't begrudge anyone creating habitat in their yard.  As a matter of fact, I think it's much better than having a huge swath of mowed, sprayed and fertilized turfgrass in a yard.


But the question of what kind of habitat would be best to create was the one I was left with.  At the time when I was doing residential design, I was very much an advocate of native plant restoration, which in Minnesota usually meant restoration of prairie or savanna ecosystems.

Which is all well and good- but the larger system that allows a prairie or savanna to thrive is essentially broken- at least where I live.  There are no more sweeping prairie fires, the balance of beneficial fungi and microorganisms in the soil has been pretty significantly altered, and there are no roaming herds of bison and antelope to graze the swaths of native prairie.   As a result, the restored prairies of the Midwest are maintainted with regular herbicide applications, a controlled burn here and there, and a lot of mowing.

Which, over time, really put me off of the whole idea of prairie restoration.  That, and discovering a new way of thinking about landscape restoration-- permaculture.   That is- the idea that a landscape should first and foremost serve the needs of the current inhabitants of the area, rather than try to recreate the flora of an arbitrarily selected earlier era.


Now, permaculture usually implies an agricultural use- particularly the growing of food for people in the  landscapes where people live.  And that's a really good use.  If you've followed this blog for any time at all, you know I'm a big fan of growing as much food as I can in my little yard.  But there's another use of space that's important too- creating habitat for the people who occupy the space.

When there are kids in a family- creating kid habitat should be one of the top priorities for the grownups in charge of the landscape space.

Often- and this is particularly true in the outer-ring suburban areas where I used to work- this means mowing a big swath of lawn 'for the kids'.  I don't know how many times I suggested adding fruit trees or shrubs or native grasses to a mega-lawn in the outer burbs, to be told that they needed to keep the space open for the kids.

Which raised the question- were the dads maintaining the lawn for the kids- or for themselves?  Is lawn mowing actually a way for suburban dads to reconnect with their  agricultural roots- by riding a tractor over a field of hay and mowing it down?   Wouldn't they be better off planting a vegetable garden and making a space that their kids would actually use?

Well yeah.  But what do kids really want in a yard?  What constitutes ideal kid habitat?

Having two kids aged 5 and 6, I can at least start to answer that question.  Since I find this sort of thing interesting, I've tried to watch and see where they choose to spend their time when they play in our front and back yards.

The first thing I notice is that they don't like neat, clean areas.  The opposite of what most adults seem to want, or think they ought to have in a yard.  Kids gravitate to messy spaces.  Places with bugs (small, harmless ones usually) sticks and mud and half-buried toys.  They like some disorder.  Maybe it gives them a reason to explore.  A neat and clean landscape is immediately obvious as to what is there and what isn't.  A messy landscape opens questions, and my kids like asking a lot of questions.

I sometimes wonder if kids like making messes because they just feel more comfortable in a messy environment.  Where there are things all around to look and and play with and explore.

The next thing I notice is that they like small, partially confined spaces.  Somewhere that they can hide, and that's scaled to a kid's size.   They exist in a world that is mostly scaled to grown-up proportions.  Tables that fit a grownup, but that are over a kids' head, chairs that their feet swing off of.  Houses where they can't reach the sink without help and where the potty is bigger than they are.

When a kid is in a small space, it probably feels comfortable for all of the same reasons that big people are comfortable in the spaces we create.   I remember building houses out of cardboard boxes and blankets as a kid and having so much fun being in a space that fit me- as a small kid- and where I could hide from the grownups who were always telling me what to do. 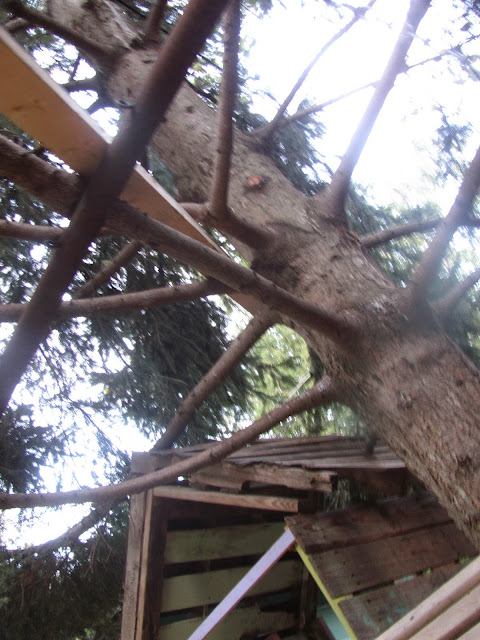 So, building a little playhouse fills that need, but the same thing is true of just leaving a space between two shrubs or behind a fence where they can hide.  As a matter of fact, the same day that I built a stoop for our back door, our kids and the neighbor girl declared that that was their new hideout and that we shouldn't remove any of the decorations that they brought in to make the space a bit more homey.  So most of it is still there.

The other thing I noticed is that they don't like spaces that are too finished- for lack of a better word.  There has to be some ambiguity.  They have to be able to add to or customize a place or a thing.  In the case of my kids- it was painting the playhouse.  After it was done, I brought out some old house paint and let them mix the colors and splatter it on the side of the playhouse.  They had a lot of fun- and made the house their own.

What they like even more than the playhouse is a little hidden corner between our garage and the neighbor's garage that they access by crawling between the tall ferns in the raingarden.  It's the secret hideout- and though they didn't make it- it's close enough.   The fact that they discovered it, and that grownups don't go there often is enough.  I ignore the little trodden-down pathway through the raingarden because I'm happy to see them having fun in the backyard.

That is kid habitat.  I don't think there's anyone who will certify it as such.  Most people would just say that's a mess.  And it is.  On purpose.  Sort of.  Because I'm still a little bit of a kid myself and I just like it that way.